Bachpan Bachao Andolan > Whats New > Hailing From UP, 8 Child Labourers Rescued From A Factory In Ludhiana

Prompt action by Bachpan Bachao Andolan and close coordination with agencies considered has helped in rescuing eight children who were working in an automobile spare parts factory in Jaspal Bagal area of Ludhiana.

BBA team had alerted the authorities about the minors who were being made to work in the factory. Subsequently a raid and rescue operation was carried out with close coordination of the District Child Protection Unit, local Police, Labour Department, Education Department, Childline and BBA’s Punjab team.

The raid revealed that the children belonged to Uttar Pradesh and were working in the factory for the past one month. They have been produced before the Child Welfare Committee and sent to a local child care institute. The Daily Dairy Registration (DDR) has been done and investigation is going on for the registration of FIR in the case.

The rescue operation was carried out as a part of the ‘Action Week Against Child Labour’ in Punjab. 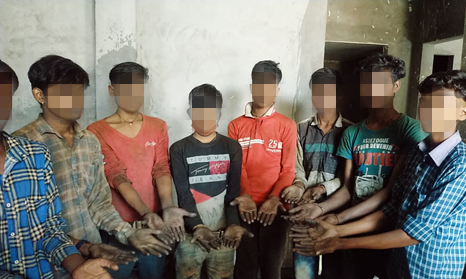